A building backing onto St. Sampson's churchyard in Cricklade was converted for use as the parish workhouse in 1726. A master's house was added at its eastern end. It was originally built as a school in 1652 by Robert Jenner, a City of London goldsmith and MP for Cricklade. It subsequently reverted to use as a school until as recently as 1960.

A house at the eastern end of Purton High Street was also used as a poorhouse.

The Cricklade and Wootton Bassett Poor Law Union formally came into being on 24th November 1835. Its operation was overseen by an elected Board of Guardians, 17 in number, representing its 14 constituent parishes as listed below (figures in brackets indicate numbers of Guardians if more than one):

The Cricklade and Wootton Bassett Union workhouse was built in 1837 at Purton. The Poor Law Commissioners authorised an expenditure of £3,750 on construction of the building which was to accommodate 200 inmates. It was designed by George Wilkinson who was also the architect of many other workhouses including Wiltshire ones at Malmesbury and Devizes. His design for Cricklade and Wootton Bassett was based on the model cruciform or "square" plan published by the Commissioners in 1835. It included an entrance and administration block at the north, with the rear ranges arranged in a cross to create separate exercise yards for the different classes of inmate (infirm/able-bodied, male/female). The site location and layout are shown on the 1923 map below.

Only the entrance block of the workhouse survives and is now used as a doctor's surgery.

Another unusual survivor of the Purton workhouse is a set of metal stamps bearing words such as "MALE", "RECEIVING", "INFIRMARY", "MASTER", "OLD" and do on. Exactly what these were used to imprint is still a mystery. 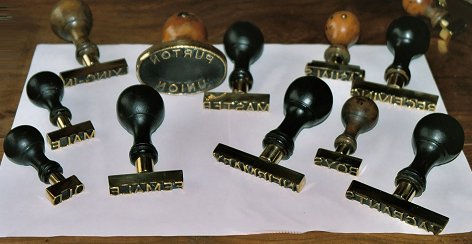 In 1914, the Cricklade Union established a children's home in a house on Restrop Road that became known as Red Gables. Its location is shown at the far left of the map above. The home, which could accommodate 16 children, was later taken over by Wiltshire County Council. It finally closed in 1997 and the building has now been demolished.