Gildersome's workhouse was located at the east side of Town End, adjacent to where the Methodist church now stands.

Bramley subsequently opened a workhouse at the north side of Town Street. 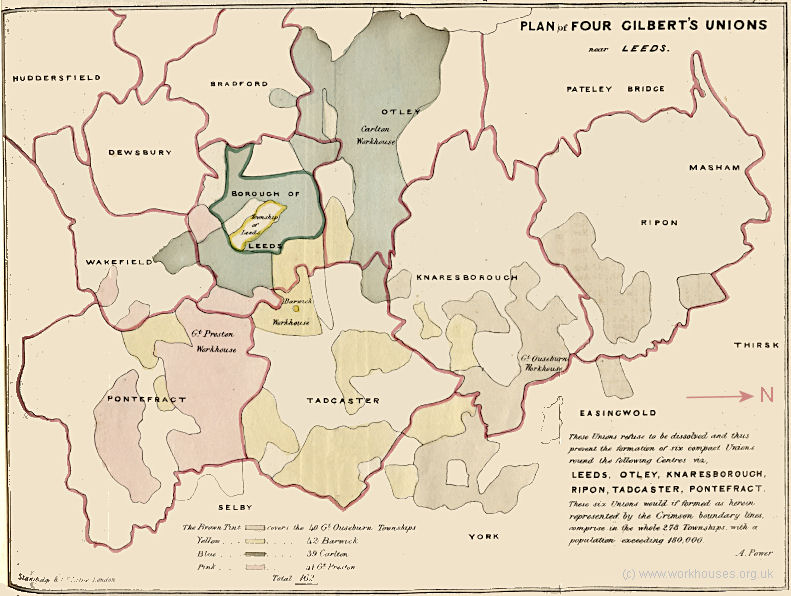 The Bramley Poor Law Union, the westernmost of these three new unions, was formally created on 27 December 1862. It initially comprised the townships of Bramley and Gildersome, both of which had previously continued after 1834 as independent administrations, effectively still operating under the Old Poor Law. The two townships had each operated their own workhouses but new union appears to have only retained the Bramley premises and closed the Gildersome establishment. Following the dissolution of the Carlton Gilbert Union in 1869, three of its former members, Wortley, Armley and Farnley, were added to the Bramley Union in 1869.

A new Bramley Union workhouse was built in 1871-2 at a site on Green Hill Road in Armley. The architects were CS and AJ Nelson who also designed the Wharfedale Union workhouse at Otley. A report from 1872 describes its opening:

THE new workhouse for the Bramley Union, comprising the townships of Bramley, Armley, Farnley, Gildersome, and Wortley, has just been completed and opened. Intended to meet the requirements of a district, with some 45,000 inhabitants, the works connected with the new buildings are necessarily upon an extensive scale. Sixteen acres of land constitute the workhouse estate, and situated in the high. lying district of Hill Top, near Armley, the block of buildings form a conspicuous feature in the landscape. The workhouse, which will accommodate some 220 inmates, has been erected, including the purchase of land, construction of approaches, &c., at a cost of 15,5001. The opening of the building was celebrated by a dinner in the dining-hall, at which there was a numerous attendance of those interested in the construction of the new building. The accommodation provided in the workhouse is as follows :— Main building—Infirm men, 32; ditto, women, 32; able-bodied men, 10; ditto, women, 10 ; disorderly, 10; boys, 10; girls, 9; children, 8; married couples, 4; spare bed-rooms, 10; ditto, 9—144. Entrance buildings—Male probationers, 5 ; ditto, vagrants, 6; female probationers, 5; ditto, vagrants, 622. Infirmary—Males, 22 ; ditto, imbeciles, 6 ; females, 16; ditto, imbeciles, 6 ; lying-in ward, 4-54. The outlay on the main building, boundary walls, dining-hall, porter's lodge, boardroom, offices, receiving and vagrant wards, and the necessary out-offices, is estimated at 9,275l. 10s.; on the infirmary and imbecile wards, &c., 2,7551. 10s.; on the entrance-gates, roads, architect's commission, and clerk of the works, 900l. ; or a total of 15,510l., or about 70l. per bed, including the site (2,57l.), but exclusive of about 1,300l. for furniture and fittings. The buildings generally are of plain design, with the details in the Gothic style of architecture. The workhouse is approached from the Bramley and Wortley road. Near to the entrance-gates has been erected a block of buildings 181 ft. in length, and containing porter's lodge, probationers' wards, vagrant wards, disinfecting apparatus (supplied by Messrs. Nelson, Leeds), offices for the clerk and relieving officers, and the board-room. The main block of the workhouse buildings is two stories in height, with a frontage of 213 ft., and a breadth of 47 ft. The principal entrance is surmounted by a turret or tower for a clock, which rises to a height of about 65 ft. This entrance divides the building into two wings, the left occupied by the males, and the right by the females. On each side of the entrance-hall are the apartments of the master and the matron. From end to end of the principal block runs a central corridor, from which the various wards are readily reached. On the ground-floor are day-rooms and dormitories for the infirm, wards for children, lavatories, and other rooms; and on the first-floor other apartments for the use of the officers and the accommodation of inmates. Opposite the principal entrance and in the rear of the chief block of buildings, is a dining-hall, the size of which is 50 ft. by 30 ft., and the height about 24 ft., the rest of the rooms being 11 ft. in height. It is intended to use ibis ball also for divine service. Immediately adjoining are a cooking kitchen, larders, and other domestic offices, the kitchen having been fitted up with one of Messrs. Benham & Son's (London), patent cooking-ranges. At the back of the building are paved and spacious yards, where the inmates can take exercise, whilst further to the rear is an infirmary, two stories in height. The architects are Messrs. C. S. & A. J. Nelson, Leeds and Derby. The contractors for the various works have been, -Messrs. Charles Walker & Co., Holbeck, bricklayers and masons ; Mr. Jno. Tomlinson, Leeds, joiner; Mr. Jno. Senior, Leeds, plasterer; Mr. Jonas Grant, Wortley, painter; Mr. Edwin Thornton, Shipley, slater; Messrs. Sutcliffe & Wilkinson, Bradford, plumbers and glaziers; Messrs. Heaps & Robinson, Leeds, iron founders. Mr. John Kershaw, of Bramley, has acted as clerk of the works.

The workhouse location and layout are shown on the 1906 map below:

The porter's lodge, receiving wards, offices and the board-room lay at the north of the site at the entrance from the main road.

The main block faced to the east, with the Master and Matron's quarters at its centre. Females were accommodated at the northern side, and males at the south .

The dining-hall at the rear of the main building also served as a chapel.

Bramley rear of main block and dining hall from the north-west, 2001.
© Peter Higginbotham.

The original infirmary at the west of the site also included imbecile wards.

Bramley 1895 infirmary and admin block from the north, 2001.
© Peter Higginbotham.

In 1925, Bramley, togther with Hunslet and Holbeck, were absorbed by Leeds.

The workhouse later became St Mary's Hospital, providing care for the elderly. The main building was demolished in May 2021, prior to a major redevelopment of the site.