A parliamentary report of 1777 recorded parish workhouses in operation at Lamborne (for up to 40 inmates), Navestock (25), and Willingale Spain (12).

The Ongar workhouse was built in 1830 at Stanford Rivers. It accommodated around 100 inmates and served an incorporation of nine parishes (Abbotts Roothing, Bobbingworth, Greensted, Shetley, Stanford Rivers, Stapleford Abbot, Stapleford Tawney, Stondon Massey, Little Laver and Great Warley) formed under Gilbert's Act. The building's most distinctive feature was its central hub, from whose windows the workhouse master could obtain a clear view of the inmates in their various exercise yards. This was still a relatively novel feature — other early examples can be found in the Caistor workhouse of 1801, and the Thurgarton Incorporation workhouse of 1824. At Ongar, however, the hub projected only at the rear of the main building.

Ongar Poor Law Union formally came into existence on 8th April 1836. Its operation was overseen by an elected Board of Guardians, 29 in number, representing its 26 constituent parishes as listed below (figures in brackets indicate numbers of Guardians if more than one):

In 1837, the new Ongar Union purchased the existing workhouse building from the incorporation for the sum of £4,416. Over the following three years, it was enlarged to increase its capacity to over 200. Its location and layout are shown on the 1895 map below.

The original workhouse building comprised three floors. The central hub contained a committee room on the ground floor, with the master's quarters above. Accommodation for the various classes of inmates was placed in the wings to each side.

At the rear of the main block, the supervisory hub provided views over the inmates' yards. A single-storey kitchen projected at the centre.

The dormitories on the upper floors were originally divided into separate sections for able-bodied and elderly/infirm inmates, each with its own staircase.

To the south of the main building was the two-storey workhouse infirmary. The present building dates from 1871 but it replaced and incorporated parts of an older structure which originally comprised a single storey.

The workhouse laundry was located on the women's side at the north-west side of the building.

In July 1870, the Board of Guardians' minute books record that unspecified complaints had been made against one of the union's District Medical Officers, William Gilmour (the 4xGreat-grandfather of TV and radio presenter Fearne Cotton). In October 1871, a charge of neglect was recorded against Gilmour in connection with a pauper child named Rose Madle at Fyfield. The Guardians had authorised a visit to her on 8th September, but Gilmour failed to make the visit and the child died the next morning. He claimed that he had not attended on 8th because he had been ill and his usual back-up had left the area and he had not yet managed to arrange a replacement. He said that had attended on the morning of 9th, but child died a few hours later. The matter was referred to the Local Government Board who concluded that Gilmour had been guilty of neglect by failing to ensure that a substitute doctor had been available to attend the girl on 8th. Gilmour left his post soon afterwards and tried to establish a private medical practice at various places, gradually moving towards London. In 1881, he became the dispenser at the Bethnal Green workhouse. 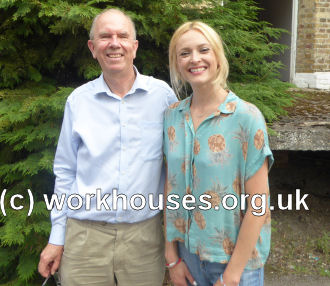 At Ongar workhouse site with Fearne Cotton for BBC TV's Who Do You Think You Are?, 2017.
© Peter Higginbotham.

Between 1902 and 1920, the Master and Matron were John and Eliza Underwood. Their daughter Vera recalls life in the workhouse in the early 1900s:

Whilst they were Master and Matron, my parents' salaries were very low — mother had about £16 a year and my father £22, plus our keep of course. The post was advertised for a married couple and they were told they must not have any children. I was later told how worried they were when first my sister Constance came along in 1905, and my arrival in 1911. However, they were not 'sacked' but I expect they were given dire warnings by the Board of Guardians.

The main front block was divided into male and females sides, consisting of a dormitory and living room in each. There was a large cupboard, divided into square sections, and each person had a section to put their possessions in. There were no curtains at the windows and only floorboards. I cannot remember any running water, so they must have washed in bowls of water brought from 'somewhere'. The only tap I remember was in our bathroom and that was cold water.

We only had one married couple there. All the rest were either widows, widowers or spinsters, and all 'without visible means of support'. The couple used to sit next to each other at the service on Sunday afternoon and hold hands all the time, as they were separated on admission — living in male and female accommodation respectively. As a child, this upset me very much. My father and mother, unofficially, used to arrange for them to be together as much as possible — easy in summer in the garden, but difficult in winter.

The school Hall was used for various functions, e.g. Christmas dinner, concerts etc. and my mother used to make huge material panels with large white cut-out letters stuck on them with texts like 'Peace on Earth and Goodwill Towards Men', and of course 'Happy Christmas'. The Hall was decorated with a huge Christmas tree and evergreens etc. (I loved it.) Long trestle tables spread with white sheets I suppose they were, and decorations, crackers etc. Some of the inmates would sing or recite after the dinner and 'Boxer', who was about 30 and mentally ill, always sang 'Daisy, Daisy, Give Me Your Answer Do'. One of the Guardians would come and carve the huge joints of pork, from one of the workhouse pigs which I had watched being cooked on a 'spit' before the fire in the kitchens. The Christmas pudding with custard and sauce was delicious.

The workhouse closed in 1920 and the then inmates were moved to the workhouse in Epping. In 1926, the building was taken over by Piggott Brothers, a tent and flag manufacturers. In more recent times, the London Hoist company has occupied part of the building, although much of the property has been standing empty.