In 1758, Carmarthen began renting part of the Old Priory for use as a poorhouse. In 1799, the vestry decided to erect a new poorhouse at 'Waundew Common'. It proved an expensive project, leaving the parish with debts of around £1,400 by the time it opened in 1805.

In 1777, Laugharne had a workhouse for up to six inmates. The following year, a workhouse was established at Llangendeirne where 'all whom refuse to come in shall not be entitled to any relief.' Poorhouses were also opened by Llanartheny and, in 1796, by Newchurch.

Carmarthen Poor Law Union was formed on 2nd July, 1836. Its operation was overseen by an elected Board of Guardians, 32 in number, representing its 28 constituent parishes as listed below (figures in brackets indicate numbers of Guardians if more than one):

In October 1836, tenders were sought for the enlarging of the the 1805 building, at the wests side of what is now Penlan Road (SN411206). The gatehouse was retained from the earlier building and in 1845 a register office was added at its south side. Following the enlargement, the two-storey main building had a double-courtyard layout. The workhouse capacity was then set at 260 places. The workhouse location and layout are shown on the 1906 map below.

A two-storey entrance block containing an entrance archway was located at the east of the site on Penlan Road.

On the 19th June, 1843, the workhouse was stormed by the "Rebecca Rioters" who, in 1842-43, carried out a campaign of protests across South Wales, mainly against the high charges at the toll-gates on the public roads. The rioters took their name from the Book of Genesis (Chapter 24, Verse 60): "And they blessed Rebekah and said unto her, Thou art our sister, be thou the mother of thousands of millions, and let thy seed possess the gate of those which hate them." The rioters often included one or more "Rebecca" figures dressed in women's clothes and wearing a wig of ringlets. 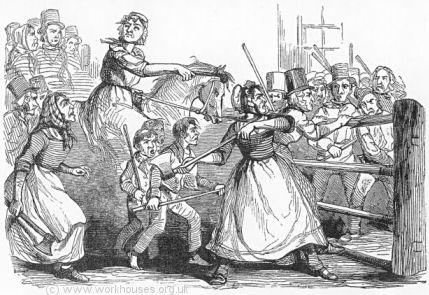 On the day in question, protestors entered Carmarthen to lay their grievances before magistrates. However, possibly diverted by local unruly elements, a large crowd arrived at the workhouse where the matron was forced to hand over her keys. The mob then rushed into the courtyard and then entered the buildings where they smashed furniture and broke windows. The riot continued until the arrival of the 4th Light Dragoons who brought proceedings until control and took sixty prisoners.

In 1879, a new two-storey block housing forty-six children was erected at the south of the workhouse. It was designed by George Morgan.

On the afternoon of 20 March 1906, a fire broke out in the master and matron's quarters in the main building of the workhouse. It was said to have been caused by an imbecile pauper stirring the fire during the temporary absence of the matron. The fire brigade quickly arrived and the inmates were moved to the children's and other blocks of buildings, with no casualties occurring. The adults' accommodation, including the sick wards, and the master and matron's residence were completely gutted. At the time, there were 103 inmates in residence, including children and 20 certified imbeciles.

The main block was rebuilt in 1908 at a cost of around £9,000. The new building was three storeys high with a T-shaped layout.

A small building nearby may have been an isolation ward for infectious cases.

From 1905, to protect them from disadvantage in later life, the birth certificates for those born in the workhouse gave its address just as 1 Penlan Road, Carmarthen.

During the First World War, the workhouse was used as an Auxiliary Military Red Cross Hospital. Troops were also quartered there during the Second World War.

After 1930, the workhouse became a Public Assistance Institution. At some time around then, the main building was modernised with the removal of the east and west ranges, the addition of sanitary towers at the rear of the building, and the remodeling of the entrance.

The site later housed the offices of the local education authority. In 2000, a few of the former workhouse buildings were still occupied by charitable organisations, but the majority of the site was becoming derelict. In March 2018, a fire caused significant damage to the surviving infirmary block.

By 1920, the Carmarthen Union was running a children's cottage home known as Waterloo Cottage. In 1924, the home could accommodate 15 children, with Jane Evans as its Superintendent. The property, located off Waterloo Terrace to the south of the workhouse, is now known as LLwyn Martin.

By 1929, the home had moved to new premises at 'Ystradwrallt' on Station Road, Nantgaredig.