The Great Boughton Poor Law Union formally came into being on 17th May 1837. Its operation was overseen by an elected Board of Guardians, 103 in number, representing its 101 constituent parishes and townships as listed below (figures in brackets indicate numbers of Guardians if more than one):

The population falling within the Union at the 1831 census had been 23,988 with parishes ranging in size from Edgerley and Calton Abbots (population 11 each) to Hawarden (5,414). The average annual poor-rate expenditure for the period 1834-36 had been £10,033 or 8s.4d. per head of the population.

Great Boughton's 103 Guardians and 101 member parishes and townships made it the largest union in the country. For two decades after its formation in 1837, the union resisted the building of a workhouse. Its capitulation came after the Poor Law Board decided that the union covered too great an area and split off the western part in 1853 to form the new Hawarden Union. In March, 1871, Great Boughton was renamed Tarvin, with further of its constituent parishes being transferred to the recently formed Chester Union.

In 1857, Great Boughton Union built a workhouse on a 4-acre site on the east side of Heath Lane in Great Boughton. Designed by J Harrison, it accommodated 100 inmates and its construction cost around £2,500 plus a further £500 for the site. The workhouse location and layout are shown on the 1897 map below: 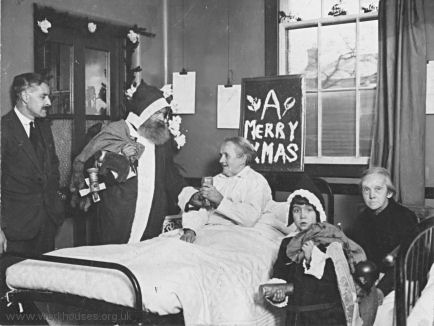 The workhouse later became Tarvin House providing care for the elderly. Sadey Gift Guy, who grew up there in the 1940s and 50s, says:

My Parents were Mr Norman G Guy and Mrs Sadey D Guy. My parents were Master and Matron at Tarvin House from 1939 to 1956. My Mum died at Heath Lane 10 days after she had retired age of 55 years. They had kept the old Poor Law contract and could both retire together at 55. It was a sad time at the hospital.

The workhouse buildings no longer exist and modern housing now occupies the site.