In a report dated November 1729, the early workhouse directory An Account of Several Workhouses... records the operation of a parish workhouse in Westham [West Ham]:

A Wealthy Baronet having an Estate in this Parish gave a large Piece of Ground for building a Workhouse upon, and for Gardening, the Parish paying Annually 11 s. only to him and his Heirs, as an Acknowledgment, while it is converted to this Use ; and though the House has not been built above 3 Years, the Taxes are reduced about half ; many of those Pensioners who before spent the Alms of the Parish in Tea, and other Entertainments, now live without it, and turn themselves to Labour in their own Houses, to avoid being sent to the Workhouse.
THE Poor are generally from 40 to 45, old and young, in Family, and such as are able to work, are employed in picking Ockam, the Junk for which is bought at 7 s. per hundred. They have a very commodious House, built at the Charge of the Parish, where many of the Poor enjoy more Comfort than ever they did before.
THE Managers consist of 6 Gentlemen, chose Annually by the Vestry, being 2 out of each of the 3 Wards, joined to the Churchwardens and Overseers of the Poor; 5 to make a Quorum, who meet the first Monday in every Month, to inspect the management of their Steward, and by their Accounts for one Year's Provisions, Cloathing, Shoes, Salaries to the Master and Mistress, with 15 Chaldron of Coals, their Expences from January 1727, to January 1728 amounted to 230l. 13s. 11d. which is a great Proof of their Frugality, each Person being wholly maintain'd for about 5l. per Annum, and all the Produce of their Labour saved towards defraying the said Expence.

A parish workhouse was set up by Walthamstow parish in 1726 in rented premises on Hoe Street. In 1730, a purpose-built workhouse was erected on an acre of Church Common purchased for £6. The building, a simple two-storey design with eight rooms accommodating 30-40 inmates, cost £343.12s.3d. It was enlarged in 1756, and again in 1779, and by the 1820s usually accommodated more than eighty.

A plaque above the entrance door spelt out the ethos of the establishment: 'if any would not work neither Should he eat'.

Gardens at the rear of the workhouse were used for the cultivation of fruit and vegetables.

A parliamentary report of 1777 recorded parish workhouses in operation at West Ham (for up to 155 inmates), Leyton (30), and Walthamstow (50).

West Ham Poor Law Union was formed on 31st May 1836. Its operation was overseen by an elected Board of Guardians, 24 in number, representing its 7 constituent parishes as listed below (figures in brackets indicate numbers of Guardians if more than one):

A new West Ham Union workhouse was built in 1839-41 in Leyton. It was designed by Alfred Richard Mason and was based on a T-shaped main block, with lower wings to the rear creating two courtyards for the use of male and female inmates. The building was extended to provide additional accommodation in 1845. Its location and layout are shown on the 1867 OS map.

The main block was a three-storey structure containing offices, infirm wards and a surgery on the ground floor, the Master and Matron's quarters and inmates' wards on the first floor, and lying-in infants' wards on the second floor. The rear wing contained a dining-room and stores and a kitchen in the basement.

A plain chapel was erected to the south of the workhouse in 1840.

To the west of the chapel was the board-room block which is believed to have been added in the 1870s and designed by Lewis Angell.

A matching but somewhat less ornate stores building lay to the east of the chapel.

A North Metropolitan horse-tram thought to be at the south side of West Ham Workhouse, c.1890.

Extracts from the Guardians' minute books provide a taste of life in the workhouse:

3Oth October 1840
It was resolved that in the main building 17 stoves for the sleeping rooms be not ordered but 4 stoves for the Masters' rooms be placed on order. In the boys establishment 2 stoves for Masters rooms be ordered and 3 stoves for the boys sleeping rooms — 1 small one only to be ordered for each.
3Oth June 1845
It appeared on reference to the Pauper Offence Book that Elizabeth Pope an able-bodied pauper, having wilfully destroyed 2½ ozs. of bristles, the Master had punished her for such an offence by stopping her broth for 48 hours.
1st August 1845
20th September 1846
...that in consequence of the quality of the potatoes in the House being very bad, six ounces of bread be substituted on Sunday for dinner in lieu of potatoes. Three ounces of rice on Tuesdays and Thursdays in lieu of potatoes, and that in every other case in which potatoes are now provided for the children, rice be substituted.
28th August 1856
...in compliance with the request contained in the Poor Law Board's letter of the 13th instant it is resolved that the following dietary tables for the pauper children from 2-9 years of age be submitted for their sanction and approved:
2-5 years 5-9 years
As for 5-9 years but with an extra ½ oz bread per day and an extra ¼ oz of butter.
3rd December 1857
Resolved that the application of the four inmates named Avienberge, Millwood, Stevens and Cowell for an extra allowance of diet whilst being employed during extra hours in pumping' water be refused, and that they be not allowed whilst inmates of the Workhouse to return to the pump again nor yet be employed in the field but be set to pick oakum.
11 August 1859
Alexander Barber stated that the boys in the Workhouse School were refused access to water to drink and that he had been told that for want of pure water they drunk soapsuds and from puddles in the yard. The Board recommended that a system with a permanent supply of pure water be provided at the school to which the boys could at any time have free access.
11th October 1888
That in the face of so many murders and outrages being carried out in the East End of London it be a special instruction to the Officer of the Casual Ward to notice particularly all male applicants so as to endeavour to find, if possible, the delinquent.

In 1867, West Ham was the subject of one of a series of articles in the medical journal The Lancet investigating conditions in the country's workhouse infirmaries. The report included a number of criticisms about the establishment:

Further details of the Lancet inspection are in the full report.

The picture below is thought to be a ward in the women's side of the workhouse, decorated for Christmas.

After the First World War, the site became known as the Central Home. In 1930, control passed to West Ham Borough Council, who ran it as a home for the chronic sick, aged and infirm. In 1936, it had around 1,800 beds. In 1948, with the inauguration of the National Health Service, it became a geriatric hospital and renamed Langthorne Hospital, forming part of the Leytonstone group of the North East Metropolitan Regional Hospital Board.

The site has now been redeveloped for residential use.

In 1900-03, the West Ham Guardians erected a large new union infirmary at Whipp's Cross, Leytonstone. It was designed by Francis J Sturdy and was a typical pavilion plan design with male and female ward blocks placed either side a central administrative complex.

A detailed description of the buildings appeared in The Builder in April, 1903.

In 1900, the union acquired the former Metropolitan Infirmary for Children at Margate for use as a seaside convalescent home. 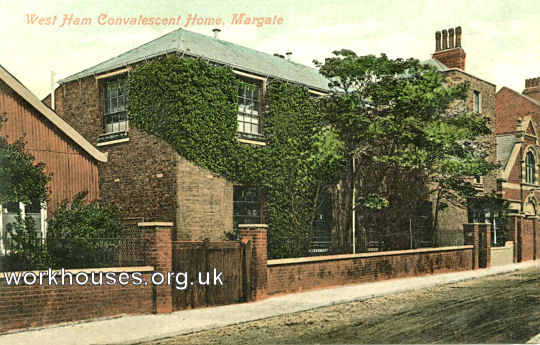 In the 1870s, West Ham had experimented with housing children in the then novel cottage homes style of accommodation. In West Ham's case, however, the homes were constructed on the main workhouse site (the exact location is unclear) and housed around fifty children in each, a number which rather rules them out as being true cottage homes.

The West Ham Guardians had a receiving home for children on Jupp Road, Stratford, London E15. In 1911, the home had 130 children in residence, 93 boys and 37 girls, aged from 3 to 17 years. The Sueprintendent was James Berry Pitts, with his wife Janet as Matron.

In 1907, the Guardians purchased a site at Aldersbrook on which, in 1910, they erected receiving homes for children being placed in the union's scattered homes. The location and layout of the Aldersbrook site is shown on the 1915 map below.

The homes were subsequently taken over by East Ham County Borough who added a recreation hall in 1931.

The homes have now been converted to flats.