The Oxford Dictionary's first record of the word workhouse dates back to 1652 in Exeter — 'The said house to bee converted for a workhouse for the poore of this cittye and also a house of correction for the vagrant and disorderly people within this cittye.' However, workhouses were around even before that — in 1631 the Mayor of Abingdon reported that "wee haue erected wthn our borough a workehouse to sett poore people to worke"

State-provided poor relief is often dated from the end of Queen Elizabeth's reign in 1601 when the passing of an Act for the Relief of the Poor made parishes legally responsible for looking after their own poor. This was funded by the collection of a poor-rate tax from local property owners (a tax that survives in the present-day "council tax"). The 1601 Act made no mention of workhouses although it provided that materials should be bought to provide work for the unemployed able-bodied — with the threat of prison for those who refused. It also proposed the erection of housing for the "impotent poor" — the elderly, chronic sick, etc.

Parish poor relief was dispensed mostly through "out-relief" — grants of money, clothing, food, or fuel, to those living in their own homes. However, the workhouse gradually began to evolve in the seventeenth century as an alternative form of "indoor relief", both to save the parish money, and also as a deterrent to the able-bodied who were required to work, usually without pay, in return for their board and lodging. The passing of the Workhouse Test Act in 1723, gave parishes the option of denying out-relief and offering claimants only the workhouse.

Parish workhouse buildings were often just ordinary local houses, rented for the purpose. Sometimes a workhouse was purpose-built, like this one erected in 1729 for the parishes of Box and Ditteridge in Wiltshire. 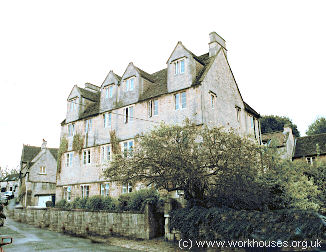 In some cases, the poor were "farmed" — a private contractor undertook to look after a parish's poor for a fixed annual sum; the paupers' work could be a useful way of boosting the contractor's income. The workhouse was not, however, necessarily regarded as place of punishment, or even privation. Indeed, conditions could be pleasant enough to earn some institutions the nickname of "Pauper Palaces".

Gilbert's Act of 1782 simplified and standardized the procedures for parishes to set up and run workhouses, either on their own, or by forming a group of parishes called a Gilbert Union. Under Gilbert's scheme, able-bodied adult paupers would not be admitted to the workhouse, but were to be maintained by their parish until work could be found for them. Although relatively few workhouses were set up under Gilbert's scheme, the practice of supplementing labourers' wages out of the poor rate did become widely established. The best known example of this was the "Speenhamland System" which supplemented wages on a sliding scale linked to the price of bread and family size. By the start of the nineteenth century, the nationwide cost of out-relief was beginning to spiral. It was also believed by some that parish relief had become seen as an easy option by those who did not want to work. There was also growing civil unrest during this period, culminating in the Captain Swing riots whose targets included workhouses. In 1832, the Government set up a Royal Commission to investigate the problems and propose changes.

In 1834, the Commission's report resulted in the Poor Law Amendment Act which was intended to end to all out-relief for the able bodied. The 15,000 or so parishes in England and Wales were formed into Poor Law Unions, each with its own union workhouse. A similar scheme was introduced in Ireland in 1838, while in 1845 Scotland set up a separate and somewhat different system.

Each Poor Law Union was managed by a locally elected Board of Guardians and the whole system was administered by a central Poor Law Commission. In the late 1830s, hundreds of new union workhouse buildings were erected across the country. The Commission's original proposal to have separate establishments for different types of pauper (the old, the able-bodied, children etc.) was soon abandoned and a single "general mixed workhouse" became the norm. The new buildings were specially designed to segregate the different categories of inmate. The first purpose-built workhouse to be erected under the new scheme was at Abingdon in 1835. 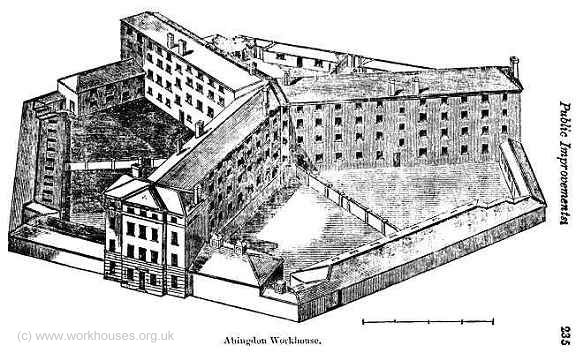 Under the new Act, the threat of the Union workhouse was intended to act as a deterrent to the able-bodied pauper. This was a principle enshrined in the revival of the "workhouse test" — poor relief would only be granted to those desperate enough to face entering the repugnant conditions of the workhouse. If an able-bodied man entered the workhouse, his whole family had to enter with him.

Life inside the workhouse was was intended to be as off-putting as possible. Men, women, children, the infirm, and the able-bodied were housed separately and given very basic and monotonous food such as watery porridge called gruel, or bread and cheese. All inmates had to wear the rough workhouse uniform and sleep in communal dormitories. Supervised baths were given once a week. The able-bodied were given hard work such as stone-breaking or picking apart old ropes called oakum. The elderly and infirm sat around in the day-rooms or sick-wards with little opportunity for visitors. Parents were only allowed limited contact with their children — perhaps for an hour or so a week on Sunday afternoon.

By the 1850s, the majority of those forced into the workhouse were not the work-shy, but the old, the infirm, the orphaned, unmarried mothers, and the physically or mentally ill. For the next century, the Union Workhouse was in many localities one of the largest and most significant buildings in the area, the largest ones accommodating more than a thousand inmates. Entering its harsh regime and spartan conditions was considered the ultimate degradation.

The workhouse was not, however, a prison. People could, in principle, leave whenever they wished, for example when work became available locally. Some people, known as the "ins and outs", entered and left quite frequently, treating the workhouse almost like a guest-house, albeit one with the most basic of facilities. For some, however, their stay in the workhouse would be for the rest of their lives.

In the 1850s and 60s, complaints were growing about the conditions in many London workhouses. Figures such as Florence Nightingale, Louisa Twining, and the medical journal The Lancet, were particularly critical of the treatment of the sick in workhouses which was frequently in insanitary conditions and with most of the nursing care provided by untrained and often illiterate female inmates. Eventually, parliament passed the Metropolitan Poor Act which required workhouse hospitals to be on sites separate from the workhouse. The Metropolitan Asylums Board (MAB) was also set up to look after London's poor suffering from infectious diseases or mental disability. The smallpox and fever hospitals set up by the MAB were eventually opened up to all London's inhabitants and became the country's first state hospitals, laying the foundations for the National Health Service which began in 1948.

Towards the end of the nineteenth century, conditions gradually improved in the workhouse, particularly for the elderly and infirm, and for children. Food became a little more varied and small luxuries such as books, newspapers, and even occasional outings were allowed. Children were increasingly housed away from the workhouses in special schools or in cottage homes which were often placed out in the countryside.

On 1st April 1930, when the 643 Boards of Guardians in England and Wales were abolished and their responsibilities passed to local authorities. Some workhouse buildings were sold off, demolished, or fell into disuse. Most, however, became Public Assistance Institutions and continued to provide accommodation for the elderly, chronic sick, unmarried mothers and vagrants. For inmates of these institutions, life often changed relatively little during the 1930s and 40s. Apart from the abolition of uniforms, and more freedom to come and go, things improved only slowly. With the introduction of the National Health Service in 1948, many former workhouse buildings continued to house the elderly and chronic sick. With the reorganisation of the NHS in the 1980s and 90s, the old buildings were often turned over for use as office space or demolished to make way for new hospital blocks or car parks. More recently, the survivors have increasingly been sold off for redevelopment, ironically, in some cases, as luxury residential accommodation.

Increasingly little remains of these once great and gloomy edifices. What does survive often passes unnoticed. But even now, more than seventy years after its official abolition, the mere mention of the workhouse can still send a shiver through those old enough to remember its existence. In Kendal, the location of a long-gone workhouse is modestly marked in a now renamed side-road. However, some local residents clearly feel this is an institution they would rather not commemorate... 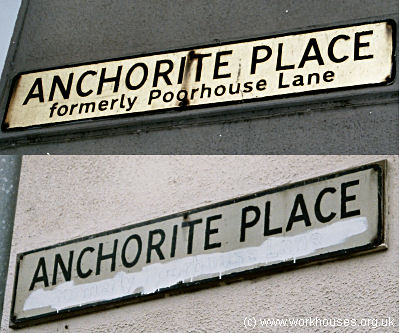 For more information about every facet of the workhouse, please explore the rest of this web-site. If you can't find what you need, try typing a word or a phrase (in quotes) into the Search box near the top of any page.