Death in the Workhouse

If an inmate died in the workhouse, the death was notified to their family who could, if they wished, organize a funeral themselves. If this did not happen, which was often the case because of the expense, the Guardians arranged a burial in a local cemetery or burial ground — this was originally required to be in the parish where the workhouse stood, but later rules allowed it to be the deceased's own parish if they or their relatives had expressed such a wish. A few workhouses had their own burial ground on or adjacent to the workhouse site.

The burial would be in the cheapest possible coffin and in an unmarked grave, into which several coffins might be placed on the same occasion. Under the terms of the 1832 Anatomy Act, bodies unclaimed for forty-eight hours could also be disposed of by donating them for use in medical research and training — this was not specific to workhouses, but applied to any institution whose inmates died while in its care. Deaths were, however, always registered in the normal way.

In some places, the workhouse had a special coffin for transporting bodies to the cemetery. This one at Londonderry had a hole on top where a warning flag would be placed when the coffin contained a body. 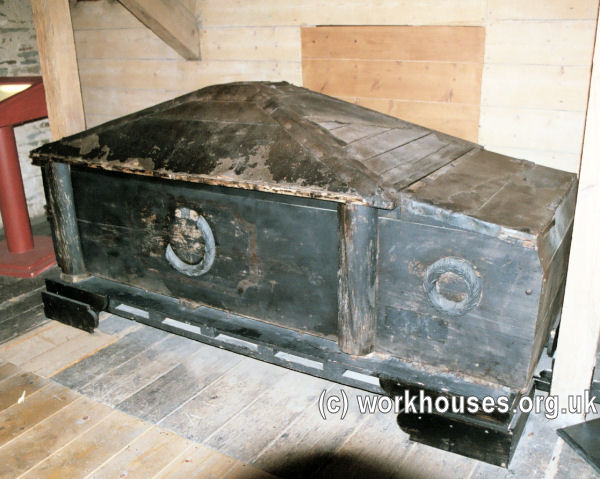 Pauper funerals were often without mourners. At Bourne in 1901, the workhouse master reported that despite repeated invitations, workhouse inmates always declined to attend funerals. This was perhaps a testimony to the old saying: 'rattle his bones, over the stones, he's only a pauper whom nobody owns.'

Following the closure of many of London's old parish graveyards in the 1850s, a number of new cemeteries — often commercially operated — were set up at out-tof-town locations. The most prominent of these was the London Necropolis at Brookwood, near Woking, which had its own rail service from its own station near Waterloo. Many Londown workhouses had contracts with Brookwood to bury their unclaimed pauper bodies. The Brookwood web page gives more details.

In September, 1883, The Times carried a report about the transport of pauper bodies to Colney Hatch Cemetery from Clerkenwell workhouse mortuary by an undertaker's sub-contractor. It had been alleged that a coach carrying five coffins, three of adults and two of children, had broken down on Exmouth Street with the coffins rolling into the road. It was also claimed that, for the sake of economy, bodies were kept in store until a batch of sufficient size was reached, resulting in offensive smells. The coffins were said to each be identified only by a name chalked on them and that during the journey the writing rubbed off. Although an investigation by a committee of Guardians refuted the allegations, it was agreed that the union should acquire its own hearse, coach and horses for use at pauper funerals.