St Mary, Rotherhithe, was the subject of a report in An Account of Several Workhouses..., dated May 1729.

A Workhouse is lately set up here, near the Footway to Deptford, and though it is not yet finished, there are
18 Poor Men and Women, and
32 Boys and Girls put into it, under the Care of a Mistress; their chief Employment at present is the picking Ockam.

The 1729 workhouse was situated on what is now Lower Road, Rotherhithe, opposite the southern end of Coburg Street (now Neptune Street). Its location is shown on the 1875 map below.

St Mary, Rotherhithe, was constituted as a Poor Law Parish on 15th February, 1836. Its operation was overseen by an elected Board of 15 Guardians. The population falling within the parish at the 1831 census had been 12,875. The average annual poor-rate expenditure for the period 1833-35 had been £7,983 or 12s.5d. per head of the population.

The parish continued using the Lower Road workhouse. The oldest part, facing to the east, was used for the able-bodied and for offices. A new block, added to the west in 1837, was occupied by the old and infirm, and by the midwifery and nursery wards. A new infirmary was erected in 1864, away from the other buildings, in what was then the garden.

In 1865, Rotherhithe was the subject of one of a series of articles in the medical journal The Lancet investigating conditions in London workhouse infirmaries. The report on Rotherhithe found much to criticise. The infirmary, though new and well equipped, had only one paid nurse. She was assisted by four pauper assistants aged from sixty to seventy-five, none of whom was "physically or mentally qualified for the duties of nursing." Things were rather worse in the wards for the aged and infirm and the lying-in women. They were left without any nurses and their sanitary facilities were "disgraceful" — with no bath-rooms or water-closets provided. The position and pay of the medical officer, Mr Firth, were described as "deplorable". He visited the workhouse each day, and had approximately forty patients under his care, plus the aged and infirm, and about twelve midwifery cases per year. He also supplied and dispensed all the drugs. His salary for all this was £35 a year. The full text of the Lancet report is available on a separate page.

In 1868, the recently formed Metropolitan Asylums Board set up six new Sick Asylum Districts for the purposes of providing hospital care for the poor on separate sites from workhouses. One of the new Districts, named Rotherhithe, comprised the St Olave Union and the parishes of St Mary Magdalen, Bermondsey, and St Mary, Rotherhithe. However, the new hospital required by the new scheme was felt to be too expensive and, instead, the Rotherhithe Sick Asylum District was reconstituted as an enlarged St Olave Poor Law Union of which Rotherhithe then became part.

The enlarged union redeployed its existing sites to provide the separate workhouse and hospital accommodation that was required. Rotherhithe's Lower Road workhouse became used for the accommodation of able-bodied male inmates. A new St Olave union infirmary was built on an adjacent site to the west in 1874-6. Its official opening in May, 1876, was the subject of the following report:

ST. OLAVE'S INFIRMARY BUILDINGS.
On Wednesday week the Guardians of St. Olave's Union opened the new buildings erected in the grounds of the Rotherithe Workhouse by Mr. H. Saxon Snell. The building will accommodate 172 inmates, but it forms only part of a scheme by which 400 beds will be provided. A great feature is the thorough ventilation of the wards. This is effected in two ways, either by a special arrangement of folding casement windows, which can be opened without patients feeling a draught ; or, if these cannot be opened, there is an upper sash hung on weights, which can be drawn down. At night ventilation is provided for by flues passing up the walls and emitting the fresh air into boxes placed under the head of each bed. These boxes have perforated zinc fronts, through which the fresh air passes into the room and under the bed, and inasmuch as hot water pipes are placed in these upright shafts the fresh air is so rarefied that on its entrance under the bed it rises, and in its course encircling, as it were, the upper part of the patient as he lies in bed, draws away from him the carbonic acid and other deleterious emanations of the body, towards the ceiling, where there is over each bed an upcast shaft for conveying away the fouled air from the ward. The building contains, besides wards for patients, nurses' rooms, medical officer's and matron's apartments, kitchen, laundry, and every requisite office. The structure was built by Messrs. Croakers Brothers, of Dover-road, and their contract, which amounted to £14,859, includes for the whole of the fittings, blinds, gas and hot-water pipes, and appliances of every description. Mr. H. Saxon Snell was the architect, and Mr. Butler the clerk of works. The roads round the building were constructed by Mr. Etheridge.

The new infirmary's location and layout are shown on the 1896 map below.

The central block contained administrative offices, with male and female ward blocks to either side. The infirmary was enlarged in 1877 and the further extended in 1890-2 to designs by Newman and Newman. 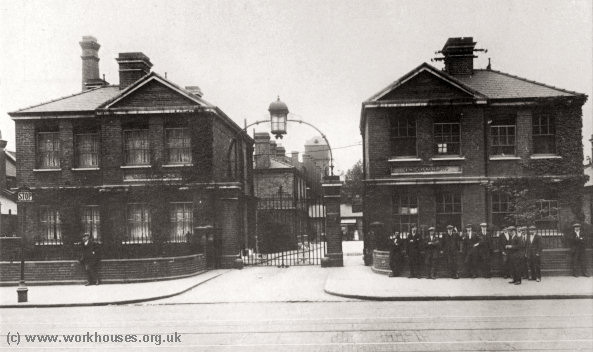 The establishment later became known as Bermondsey Infirmary, then as St Olave's Hospital. All the buildings have now been demolished.