Christmas in the Workhouse

However, in the new union workhouses set up by the 1834 Poor Law Amendment Act, things were rather different, at least to begin with. The Poor Law Commissioners ordered that no extra food was to be allowed on Christmas day (or any other feast day). The rules also stated that "no pauper shall be allowed to have or use any wine, beer, or spirituous or fermented liquors, unless by the direction in writing of the medical officer." Nevertheless, some unions chose to disregard the rules and celebrate Christmas in the traditional way. In Cerne Abbas, for example, the new workhouse's first Christmas dinner in 1837 included plum pudding and strong beer. At Andover, the inmates received bread and cheese on the previous "meat day" so as to save a ration of beef for Christmas day. Despite the lack of festive fare, Christmas Day was (along with Good Friday and each Sunday) one of the special days when no work, except the necessary household work and cooking, was performed by the workhouse inmates.

By 1840, the Poor Law Commissioners revised their rules to allow extra treats to be provided, so long as they came from private sources and not from union funds. Following the Queen's marriage to Prince Albert in 1841, the Victorian celebration of Christmas took off in a big way, with the importing of German customs such as Christmas trees and the giving of presents. Dickens' A Christmas Carol also raised the profile of the event. In 1847, the new Poor Law Board who succeeded the Poor Law Commissioners relented further and sanctioned the provision of Christmas extras from the rates.

By the middle of the century, Christmas Day (or more often Boxing Day, December 26th) had a became a regular occasion for the Guardians to visit the workhouse and dispense food and largesse. The workhouse dining-hall would be decorated and entertainments organised. The Western Gazette's 1887 report on the Christmas festivities in Chard is typical:

The inmates, thanks to the liberality of the Guardians and the kindness of Mr and Mrs Pallin, spent a very enjoyable time on Christmas Day and Boxing day. The pretty chapel was nicely decorated with holly and over the Communion-table was a cross of Christmas berries. On the walls were the words "Emmanuel, God with us". The inmates afterwards had cake and tea, which was much enjoyed. On Monday the usual festivities took place. The dining hall was elaborately decorated with evergreens, mottoes, gilded stars and Prince of Wales' plumes. ...The mottoes were of the usual; festive character but one, expressive of esteem, "Long Life to Mr and Mrs Pallin" showed the feeling entertained by the inmates towards those put over them. Dinner was served at two p.m. and consisted of prime roast beef, potatoes, baked and boiled, and each adult had a pint of beer. One ounce of tobacco was given to each man, snuff to the old ladies, and oranges and sweets to the children. After tea, which comprised cake and bread and butter, a capital magic lantern display was given and was thoroughly enjoyed by young and old. Then followed some ancient ditties, sung by the old people, and those who liked tripped it merrily. Songs were sung by the Master, Porter and several friends, and a very enjoyable evening came to an end. Cheers were given for those who had strived to make them happy.

Even at Christmas time, though, some workhouse rules stayed firmly in force, such as the segregation of males and females seen in the 1874 illustration below of Christmas festivities in the Whitechapel workhouse. 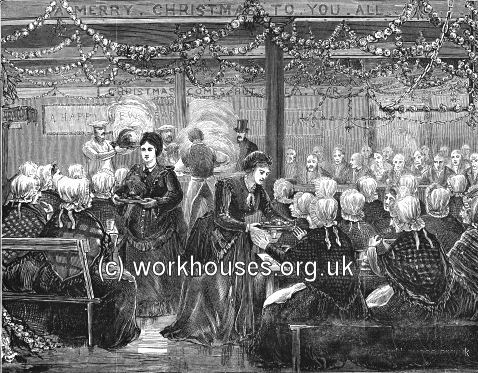 Such occasions were, however, seen by some as condescending and patronising. One of the best-known pieces of workhouse literature, the melodramatic ballad or monologue In the Workhouse: Christmas Day, was written from this standpoint. Its author, George R Sims, was a campaigning journalist specialising in stories on poverty and poor housing published in the series entitled How the Poor Live and then in a column in the new Sunday Referee. 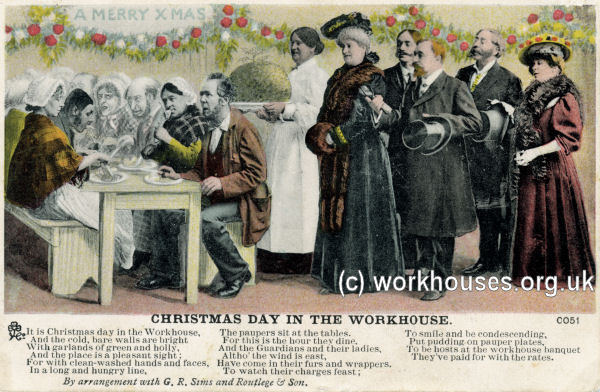 His monologue, first published in 1877, tells the story of inmate whose wife had been refused out-relief the previous Christmas and had starved to death rather than enter the workhouse and be separated from him. Here are the ballad's opening stanzas:

In the Workhouse: Christmas Day

It is Christmas Day in the workhouse,
And the cold, bare walls are bright
With garlands of green and holly,
Ad the place is a pleasant sight;
For with clean-washed hands and faces,
In a long and hungry line
The paupers sit at the table,
For this is the hour they dine.

And the guardians and their ladies,
Although the wind is east,
Have come in their furs and wrappers,
To watch their charges feast;
To smile and be condescending,
Put pudding on pauper plates.
To be hosts at the workhouse banquet
They've paid for — with the rates.

Oh, the paupers are meek and lowly
With their "Thank'ee kindly, mum's!'"
So long as they fill their stomachs,
What matter it whence it comes!
But one of the old men mutters,
And pushes his plate aside:
"Great God!" he cries, "but it chokes me!
For this is the day she died!"

Despite a number of factual flaws in its narrative (regulations allowed couples over sixty to have a room together, and the onus on the union to take in and feed anyone in case of "sudden and urgent necessity"), Sims's ballad became immensely popular. Click here to read the full version of Christmas Day in the Workhouse as the ballad is most popularly known. 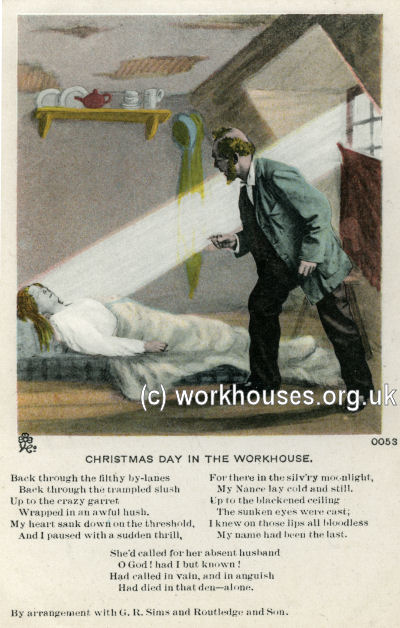 Sentimental workhouse christmas scenes were also popular with graphic artists of the 1870s and 1880s, such as the one below by by Hubert von Herkomer which appeared in The Graphic in 1876.

In the 1870s and 1880s, the temperance movement became influential in Britain and the Drink Reform League specifically campaigned for the banning of alcohol from workhouses. In 1884, the Local Government Board decreed that workhouse masters would be liable for the cost of any alcohol that was not supplied under medical instruction — a master at Islington subsequently faced a bill for over 200 gallons of port consumed by his nursing staff.

Fortunately, no such fate befell the traditional "plum pudding" served up to workhouse inmates. The following recipe for a Christmas pudding for 300 persons was kindly supplied by Pat Constable whose family includes several generations of workhouse master. She says that the recipe was perfected by her parents Lionel and Annie Williams who ran several institutions including the former Bridport workhouse in the 1940s. By this time, they were fortunate enough to have the benefit of a food mixer to help prepare the mixture.

N.B.
1 - Eggs are beaten in the Hobart mixer
2 - Wash all dried fruit in hot water before adding shredded carrots

In December 1862, a monster Christmas pudding was made in the kitchens of St Marylebone workhouse. It was not for the inmates' consumption however, but was being sent to Lancashire mill workers who had been made unemployed by the 'cotton famine' resulting from the American Civil War. 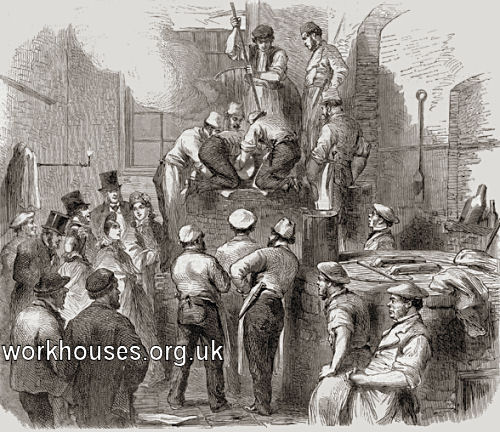 For cost-conscious keepers of the public purse, however, the Christmas pudding could still be a source of contention. At a meeting of the Newark Board of Guardians in December 1896, a heated debate ensued when it was revealed that a pudding for twenty-five inmates of the workhouse infirmary was to use 35lb of currants, 21lb of sugar, 30 eggs, and 20lb of raisins. One Board member calculated this would amount to 4lb of pudding per head whereas half that amount would surely suffice. However, a motion to reduce the quantities was declared out of order when it was pointed out the ingredients had been passed without comment at a previous meeting.

By the early 1900s, workhouses were often on Santa's visiting list, as illustrated by this 1906 picture of a boys' ward at Belfast workhouse. 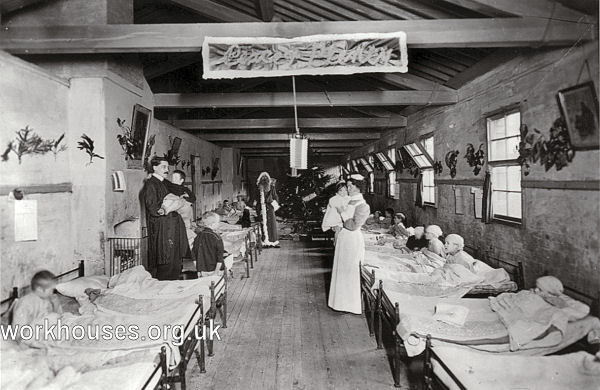 The picture below of the Tarvin workhouse was kindly contributed by Steve Martin. The small boy is Steve's father Chris, son of the workhouse Master and Matron. The institution's GP, Dr W. Woodruff, is at the left of the picture.

A well as Christmas itself, New Year's Day was often marked as shown in this 1897 illustration of the occasion in an unidentified workhouse by J. Barnard Davis.