The cultivation of a garden and the rearing of livestock was frequently a feature of workhouse operation. There were a number reasons for this, mostly aimed at reducing the cost of providing poor relief. First, a garden could provide the workhouse with a cheap and ready source of food. Any surplus or unwanted produce could be sold off and provide funds for the running of the house. Another benefit of a garden was that it offered a convenient and regular form of employment the inmates of the workhouse. Finally, training pauper children in agricultural or horticultural work could equip them with skills that would make them employable in their later life, rather than being a drain on the parish.

Relatively little is known about early workhouse gardens. In 1724, the St Paul's parish workhouse in Bedford was noted as having "a little Garden for Herbs, Onions, &c." (Anon, 1732). At the Solihull parish workhouse, opened in 1742, the male inmates kept pigs and grew turnips, cabbages, potatoes, peas and beans (Woodall, 1994). In 1797, residents of the workhouse at Tiverton were "regularly supplied with vegetables from a large garden adjoining" (Eden, 1797). At the same date, the Preston workhouse had 20 acres of the local common enclosed for its use "for keeping cows, horses, and pigs; raising potatoes, &c." The Preston workhouse inmates were employed in "husbandry, gardening, and other occupations." The Overseers accounts for the parish of Cogges in Oxfordshire in 1802-4 record payments for seeds and plants for the workhouse garden. (Crossley, 1990) while at Abingdon, in 1833, the accounts list the purchase of "1000 plants" at a cost of three shillings.

The passing of the Poor Law Amendment Act in 1834 resulted in the creation of a system of poor law unions across the country, each of which was required to provide a workhouse in which the able-bodied inmates would be required to perform work. Many unions chose to erect new purpose-built workhouses, often located on large green-field sites where productive gardens could easily be established to provide both produce and labour for the inmates.

Some unions took up agricultural and horticultural activities with great enthusiasm. At Abingdon, around ten acres of land at the rear of the workhouse was turned over to growing vegetables — swedes, mangold wurzels, parsnips, carrots, potatoes, peas and barley. In addition a dozen pigs were kept in a piggery. In May 1849, workhouse master Richard Ellis reported to the Poor Law Commissioners on the matter of "Profitable Employment of Paupers on Workhouse Land":

You understood me rightly that the produce of the ten acres of land adjacent to the Abingdon workhouse had enabled me, besides supplying vegetables for the use of the inmates, to credit the guardians with £100.
The potatoe crop, although a failure in most places, has not been so to any great extent here. The soil being of a light description, and the system of planting in the autumn having been followed, conduced, in a great measure, to the preservation of this valuable crop. The quality of the potatoes was such that they were eagerly sought after, and realized an average price of 11s. 3d. per sack.
By keeping, upon an average, twelve large pigs, which we purchase in a very poor condition, (spayed sows being preferred,) we can use all our spare offal from the garden, and this description of pigs will eat it, and get half fat upon it. We obtain a large quantity of manure from them, and, with a small purchase of stable dung, are enabled to manure the ground sufficiently. The liquid obtained from the washhouses, privies, &c., is all conveyed into close cesspools in the garden, from which it is pumped, and conveyed between the rows of the crops, particularly mangold wurtzel, by which means this plant attains a weight of from 20 to 25lbs. each, and sells at 20s. per ton. In winter the liquid manure is pumped up and distributed over such parts of the ground as are dug in, and the ground is trenched and prepared for spring crops. A gravel pit is kept always open for the employment of those who are not otherwise employed ; the gravel sold to surveyors and others produces more than sufficient to purchase manure and straw for the piggery. The seeds we grow ourselves, so that no extra charge is made upon that account in this return.
In employing paupers in the garden, or on out-door work, one thing must be particularly attended to, that is, the character of the persons so employed. Unless upon particular occasions, I do not employ young able-bodied men, or even married men with families, if I can learn that they became inmates by their own misconduct. I make it a matter of favour to employ them there; and for those who do not work well while there, some sort of employment within the house is found. The old men and boys occasionally work in the garden, which makes them cheerful and keeps them in good health. The ground is worked by the spade and a light harrow, which is drawn by the boys.
You will perceive by the return herewith sent, that the common charges are credited with £52 for vegetables consumed by the officers and paupers, which number, including children, on the average, about 200 weekly.

The collection of manure — from both the pigs and the inmates' privies — described at Abingdon was used at a number of other workhouses.

During the 1840s, the "industrial training" (a term that covered agricultural work, as well as shoe-making, tailoring, carpentry etc.) of pauper children was strongly encouraged by the Poor Law Commissioners and also by the government's Committee of Council on Education (CCE) and their Assistant Secretary, James Kay-Shuttleworth. The CCE began inspecting workhouse schools in 1846 and their reports indicate that much of the cultivation of workhouse gardens, fields and farms was being undertaken by the older boys. The CCE returns of "Farming Accounts" from different workhouses indicate the type and quantity of the produce being grown. The one shown below was for the year 1853 from Wakefield where three acres of land were being cultivated, with a further two "lying waste".

The crops grown at Wakefield included cauliflower, cabbages, potatoes, turnips, swede, parsnips, leeks, onions, celery, radishes, lettuces, parsley and other herbs. Some of these were used in the workhouse while others were sold off.

Below is a summary table of the agricultural activities from a number of unions in the east of England in 1853. The largest operation, at Wisbeach, made a profit for the year of over £80 and employed around 40 boys in raising pigs and growing vegetables such as potatoes, parsnips, peas, carrots, turnips, and onions. 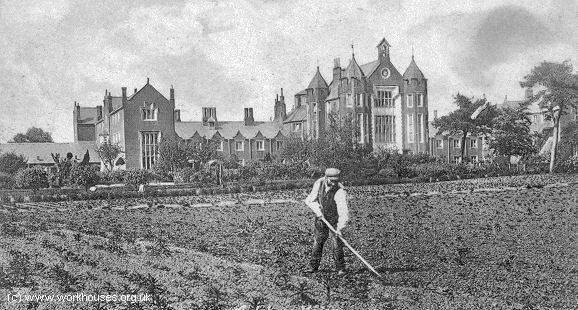 As has already been indicated, many workhouses kept livestock. The most popular animals were pigs which were fattened up with food waste from the workhouse kitchens and then sold off. Unlike vegetables, pigs were generally not kept for the workhouse's own use — the reason being that a whole pig includes a large proportion of prime cuts which were not considered suitable fare for paupers. The bacon occasionally served up to workhouse inmates consisted of just the cheapest meat, usually bought in from outside. Some workhouses kept cows which could provide milk and butter to the workhouse.

Where the workhouse's own site had insufficient space for turning over to agricultural use, it might be able to buy additional land nearby. In 1856, the Tonbridge union purchased an additional 12 acres for this purpose. In some cases, such as the Mitford and Launditch union at Gressenhall, and the Holborn union at Mitcham, a separate workhouse farm was established where inmates provided the bulk of the labour. The Mitcham farm was unusual in also having its own gas-works which supplied the workhouse. The largest of these agricultural enterprises was probably the Doe Royd dairy farm set up in around 1898 by the Sheffield Board of Guardians. Produce from the farm was used to supply the Sheffield workhouse and union infirmary. However, a veto by the land's owner, the Duke of Norfolk, meant that pauper labour was not used on the farm. 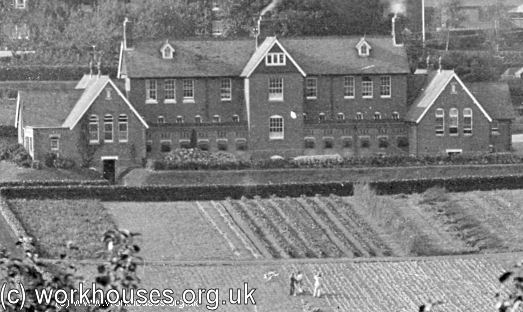 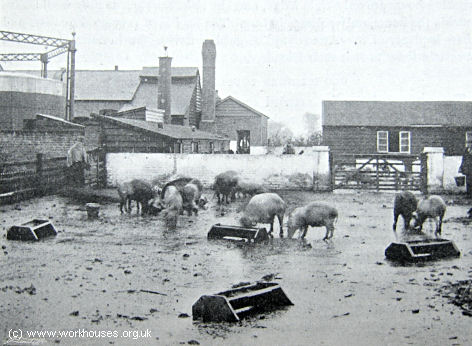 Flowers rarely featured in workhouse gardens, at least the ones frequented by the inmates. In 1895, the British Medical Journal visited a number of workhouses across the country. At Hatfield, the BMJ correspondent complained that:

The airing courts are dreary prison-like yards, asphalted, the garden, with its wealth of flowers, being behind the house out of sight. We are at a loss for the reason why the sick poor are so carefully excluded from the use of the gardens; it would surely relieve the monotony of their lives to be allowed to walk among the flower beds.

Only very occasionally, the BMJ discovered, did English workhouses brighten the lives of their inmates by growing flowers. One of the rare exceptions was Truro, where the men's airing courts had grass and flowers. Irish workhouses, the journal reported, could be rather more generous in this matter. At the North Dublin workhouse, the Master had turned a waste piece of ground into a pleasant garden for the elderly, with trees, shrubs, flowers, grass, and comfortable benches. The South Dublin workhouse, too, housed its old women in small huts around three sides round a garden where there were seats, flowers, and grass.

By the 1920s, however, some English workhouses were clearly gardening in a more domestic style. Workhouse plans of the period often feature kitchen gardens, glasshouses, cold-frames and garden shelters. A 1930 sketch-plan of the workhouse at Penistone in Yorkshire illustrates many of these features.

Several workhouse garden restoration projects are currently being carried out at workhouse museums, most notably at Southwell and Ripon. The Vestry House museum at Walthamstow also has a small garden containing plants known to have been grown by workhouse inmates in the 18th century.