(Categories 2 and 3 were subsequently revised to bring the age-limits into line with those for females.)

Husbands, wives and older children were separated as soon as they entered the workhouse and could be punished if they even tried to speak to one another. Each class had its own area of the workhouse, with walls and doors arranged so that different classes never came into contact. The main exception to this was the dining-hall which also served as a chapel. Some dining-halls had partitions down the centre to segregate males and females although these had largely been removed by the 1870s.

From 1847, married couples over the age of sixty could request to share a separate bedroom, although little provision was made for such requests — it was often argued by Boards of Guardians that elderly couples generally preferred the separation.

Children under seven could be placed (if the Guardians thought fit) in the female wards and, from 1842, their mothers could have access to them "at all reasonable times". Parents could also have an "interview" with their children "at some time in each day".

As well as the main categories specified by the Poor Law Commissioners, some workhouses added their own additional classifications. In 1886, the plans for the new Wandsworth and Clapham workhouse included separate areas for inmates of "good" and "bad" character. At Birmingham "merit" wards provided more comfortable conditions for inmates judged to be sufficiently deserving. 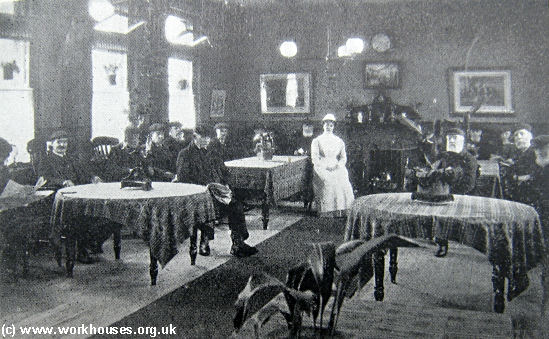 As well as being given a basic classification as to male/female, infirm/able-bodied, new inmates were also allocated to a specific dietary class — for more details see the section on workhouse food.