Save the Cleveland Street Workhouse!

In the late 1780s, the parish of St Paul, Covent Garden, erected a workhouse on Cleveland Street in the Fitzrovia district of London. For two periods in his life, amounting to five years or more in total, the author Charles Dickens lived at 10 Norfolk Street, now 22 Cleveland Street, less than ten doors away from the institution, which is now widely accepted as the most likely inspiration for the workhouse portrayed in his novel Oliver Twist. From 1836 until 1873, the building served as the Strand Union workhouse then was used as an infirmary by the Central London Sick Asylums District. In more recent times, the site housed the Middlesex Hospital's out-patients department until 2006. The building was then left empty, but when its demolition appeared likely a campaign was launched to preserve it. This resulted in the listing of the building by English Heritage in 2011. 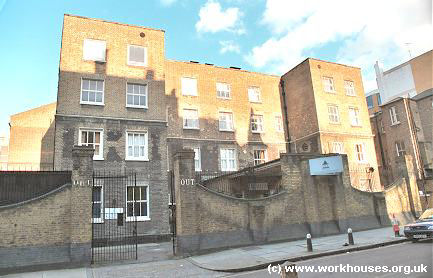 Cleveland Street workhouse from the west, 2003

The site is now at the heart of a major redevelopment scheme which, despite its listed status, will have a major impact on the workhouse and its immediate surroundings. The latest version of the plans is now open for comments until 23rd February 2017.

The planned new development for the site of the Workhouse effectively guts the Workhouse itself, for up-market flats, and destroys everything else behind it (both the 'Nightingale' Wards, the mortuary, staff accommodation and open space) in order to erect an eight-storey commercial/housing development with a deep basement on the pauper graveyard. None of the various supporting documents appears to address the fate of the dead. No archaeological work has apparently been done to gather the history of the site as a whole from the fabric of the buildings or from the soil. The plans simply ignore the history of the site, and regard the Workhouse merely as a husk. The fact that the place has been a site of care for the London poor since the 1770s appears unimportant to the developers.

The planning applications can be viewed by clicking on the links below. Remember, comments have to be in by Thursday 23rd February.